Of Ukraine, Adoption, and Lent

Of Ukraine, Adoption, and Lent

This past week, as the story of the Russian aggression against Ukraine unfolded, I was recalling my father’s story and the Ukrainian woman who saved him and called him her own. I would like to share that story with you, but also share a deeper meditation on our own adoption as sons and daughters of our Lord and its implications for our Lenten journey.

When my father found out the family who raised him was not his biological family, he was in his early sixties. The fact that his mom was not “his,” was a shock. Also shocking, was the discovery that his genes were Semitic. As it turned out my father was one of the Jewish “hidden children” of the Holocaust. My (adoptive) grandmother’s name was Maria. Her husband, Jan, was a blacksmith deported to Siberia at the very beginning of the Second World War and presumed dead. She and her 7 year old daughter, Giena, lived on her father’s farm near Brody, a town outside of L’viv, Ukraine. We are not certain how, but Maria ended up with my father, a Jewish infant of no more than 2-3 months of age, in late winter of 1943 or early spring of 1944. Did someone she know come to her door, or was she handed a child at the train station where she worked, through the wooden slats of a cattle car filled with Jewish families on their way to Auschwitz…? Both seem plausible based on stories we heard, but we really don’t know. What we do know is that Maria, a young, simple, uneducated Ukrainian woman put her life and the life of her daughter in peril to save the life of a stranger. All accounts we heard agree that from the moment my father appeared, he was ‘her son’, the apple of her eye, her pride and joy. People were confused how they managed to miss her pregnancy or delivery, but the strength of her love, her devotion, were such that no one doubted she was his mother. As I think back, I remember my grandmother calling my father by his first name only seldomly, most of the time she addressed him simply as ‘my son’.

Her love, one where her eyes perceived only the filiation, is not unlike God’s love for us, His adopted sons and daughters.  At baptism, our Lord draws us into His arms, into the arms of Mother Church, and calls us His own. From that point onward, we are forever ‘son’ and ‘daughter’, and God’s love, freely given, remains unchanged. This has a tremendous significance on how we go through the season of Lent. The contrition necessary to see how far we have gotten away from the arms of our Lord, cannot stop at the prodigal son’s, “I have sinned against heaven and before you. I am not now worthy to be called your son” (Luke 15:18-19, emphasis added). The temptation to deny our dignity as sons and daughters is a temptation of the evil one and has the potential to render our conversion fruitless. In the desert, Satan’s first words to Jesus were “If you are the Son of God…” (Matt 4:3) and they strike at a heart of a relationship. Satan wants that doubt in our hearts. He wants us to keep our eyes on our sins, for them to overshadow God’s love. True contrition and humility recognize God’s goodness first, they are not the self-loathing which focuses on our own lack of goodness. To only see our sin and lose sight of the greatest love story ever told, one where we are ‘beloved’, is to allow Satan to drive a wedge between us and God. What seeps into that space is woundedness on account of our pride, and the ugly fruit of pride is resentment and lack of trust.

‘My son’ – with those words my grandmother shut the door to the evil that sought my father’s life. As you enter the desert of Lent, challenge yourself to meditate on your divine adoption and God’s love for you first. Let the words of St. John Paul II, “We are not the sum of our weaknesses and failures, we are the sum of the Father’s love for us and our real capacity to become the image of His Son Jesus” become your inspiration to rush into your heavenly Father’s arms. Let His love and His embrace shut the door to the ever-present evil that seeks your life. No matter where we are in our spiritual journey, union with the Father who loves us is the purpose of conversion and the remedy to sin. 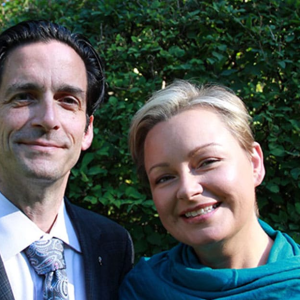 Izabella Nagle is the Diocesan Liaison for Witness to Love. She was born and grew up in Poland. When she was a teen, her family emigrated and moved to the New Jersey/New York region. Izabella has been involved in marriage ministry for 18 years and is passionate about marriage and family life. She lives in Connecticut with her husband Bill and 2 daughters.