We will be discussing:

Fr. Joseph Illo was born in a little Italian part of the Bronx, City Island, and baptized at Our Lady Star of the Sea . He grew up in New Jersey and Pennsylvania and graduated from High School in 1979. He graduated with a B.A. in English Literature from the Pennsylvania State University in 1983, and then moved to San Francisco to work for a Catholic publishing house, Ignatius Press. He went on to study philosophy, theology, and history at Blackfriars, Oxford (England) for a year, then to Rome for a B.A. in philosophy from the Pontifical University of St. Thomas (the Angelicum). While in Rome he lived one year with the Oblates of the Virgin Mary and another year as porter of the Benedictine Motherhouse, Sant’Anselmo on the Aventine Hill.

From Rome he went to New York to complete four years of seminary training at St. Joseph’s Seminary, New York, earning M.Div. and M.A. degrees in theology. Bishop Donald Montrose of Stockton, CA ordained him to the priesthood in 1991. He has worked in parish assignments at Lodi, Manteca, Hughson, as well as two years as full-time vocations director for the diocese. From June 2000 through July 2012, he was pastor of St. Joseph’s Catholic Church in Modesto. In August 2012, Fr. Illo was assigned to serve as a chaplain at Thomas Aquinas College in Santa Paula. Fr. Illo is currently serving as pastor of Star of the Sea Parish in San Francisco, California.

Fr. Illo enjoys all outdoor sports, especially backpacking, skiing, mountain biking, rollerblading, kayaking, and snow camping. He has traveled in Eastern and Western Europe, Latin and South America, and Asia, and is fluent in Spanish and Italian. He considers the parish priesthood God’s best gift to him and is very happy to be serving among the clergy of the Archdiocese of San Francisco.

Fr. Matt Williams is a priest of Jesus Christ for the Archdiocese of Boston, and currently serves as the pastor of St. John the Baptist and St. Joseph Catholic Collaborative in Quincy, MA. Fr. Matt has been a priest for over sixteen years, serving as a parochial vicar at St. Mary’s in Dedham, a variety of roles in youth, young adult and family ministry for the Archdiocese of Boston, and recently (prior to becoming pastor) as chaplain for the Shrine of Our Lady of Good Voyage. Fr. Matt has been involved in the Catholic Charismatic Renewal for more than twenty years and is a founding member and chaplain of LIFT Ministries, a monthly intergenerational gathering where participants encounter the Lord Jesus through the Eucharist, His Word, Praise and Worship, and the gathered community. Fr. Matt has a great passion to preach the Gospel, especially to youth and young adults; helping them to relate the Gospel to their daily lives. 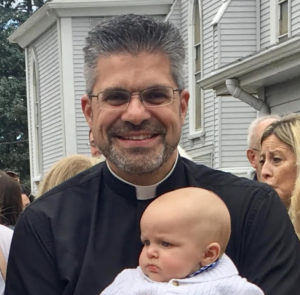 Father Patrick Beneteau grew up at St. Joseph Parish, River Canard, Ontario, a small French-Canadian farming community south of Windsor, Ontario, Canada, which is also south of Detroit, Michigan, our neighbors to the north! Not too often us Canadians get to say that!

After attending the parish grade school and local Catholic high school, Father Patrick completed an apprenticeship in the tool and mold industry in Windsor as a mold maker/machinist, and it was during that time he began to grow in my faith and began discerning a call to the priesthood. He attended St. Peter’s Seminary, London, Ontario, and was ordained in April, 2010. Since ordination, Father Patrick has had the privilege of being associate pastor at St. Michael Parish, Leamington, Ontario from 2010-2015, and four years as our Diocesan Vocation Director. Since 2019, he has been the priest-administrator of Paroisse Ste. Anne and Good Shepherd Parishes, Tecumseh, Ontario and in Sept. 2020 the priest-administrator of Paroisse St-Jérôme, the French language parish for the city of Windsor. In his spare time, Father enjoys playing ice hockey and is a member of the Flying Fathers Hockey Team, our Canadian hockey team of Catholic priests, fishing in the summer months and working in our rectory’s vegetable garden.